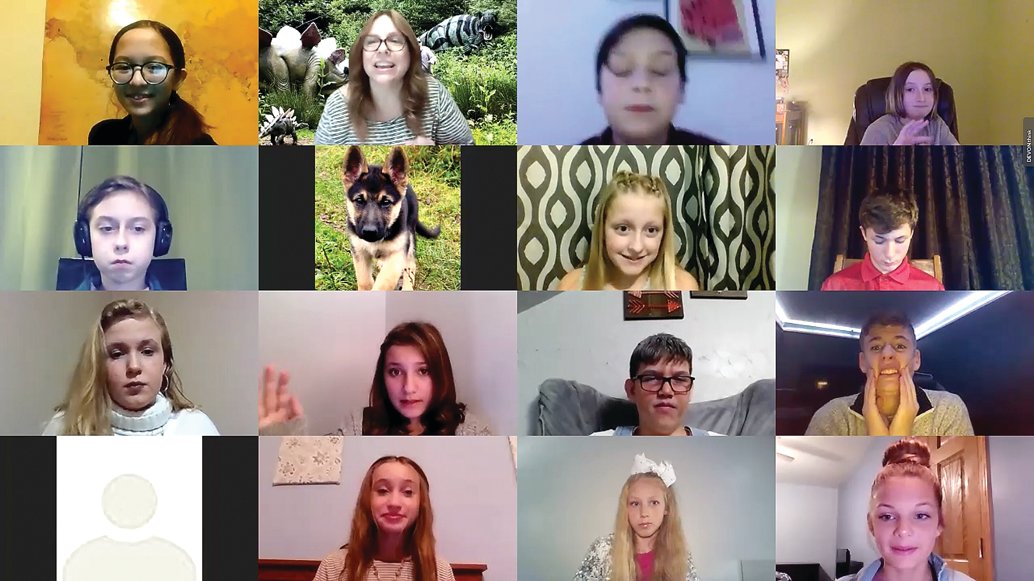 Community members interested can email Tracy Jenkins at galena@gmail.com for the link to “Bad Auditions. . .On Camera.”

GALENA–The show must go on--even in a pandemic. After both the Galena High School and Galena Middle School Drama Clubs’ spring 2020 play productions were canceled due to COVID-19, the two groups had to look for alternative solutions to performing live play productions this school year.

Galena Middle School will perform “Bad Auditions . . .  On Camera,” a comedy by Ian McWethy and Carrie McCrossen, on Zoom. In the play, a television casting director (played by Jayme Frank) has only one day to find an actor to fill the role of a lawyer in the hit TV show Crime Court. She is aided by her loyal but bumbling assistant (Everett Noble). But what seems like a simple task proves impossible when the pool of actors includes stage thespians who can’t tone it down for the screen, performers completely unable to keep themselves in frame, and an actor who seems to believe the audition is for an athlete’s foot commercial. The hopeful auditionees are played by Zoë Blaum, Violet Doyle, Mya McCoy, Macklan Murphy, Gus Nack, Nevaeh Ottenhausen, Cael Ozee, Luna Pham, Seven Smith, Caitlyn Soat, Conner Soat, Travis Temperly and Jalyn Walker.

“Bad Auditions” was written to be performed using a videoconferencing platform. All auditions and rehearsals were held online using Google Meet with the actors and directors, Tracy and Ron Jenkins, assisted by high school junior Maya Dickerson, all working from their homes.

The two-month rehearsal process culminated in three run-throughs of the performance, all of which were video-recorded. The best scenes from the three performances were then edited together into a final video production, which will be streamed online for cast members’ families and friends on Friday, Dec. 4, at 6 p.m., via a link that will be shared with them.

The play will also be shown during school hours at the middle school for all students and staff members to see.

At the high school, the production of an original movie, “Time Stamp 2020,” was well underway, having been written by assistant director Tracy Jenkins, cast and rehearsed online. Several scenes were filmed live in person, with COVID protocols in place. In mid-November, when the Illinois Department of Public Health asked people “to stay home as much as possible, leaving only for necessary and essential activities,” filming was put on hiatus until spring, at which time director Ron Jenkins is hopeful that filming can recommence so that the movie can premiere in April or May.

Email Tracy Jenkins at galena@gmail.com for the link to watch “Bad Auditions. . .On Camera.”

Reading in the parks

GALENA–Daniel “Dan” Burrows, 68, Galena,  passed away peacefully on Aug. 6, 2022, at St. Dominic Villa, surrounded by family, after a courageous battle with cancer. A funeral …

NAPERVILLE–John W. Reifsteck, 76, Naperville, passed away Tuesday, Aug. 2, 2022. A funeral service will be held at noon on Thursday, Aug. 11 at the Furlong Funeral Chapel, Galena, …