North Gramercy Park might be forgotten but could that change? 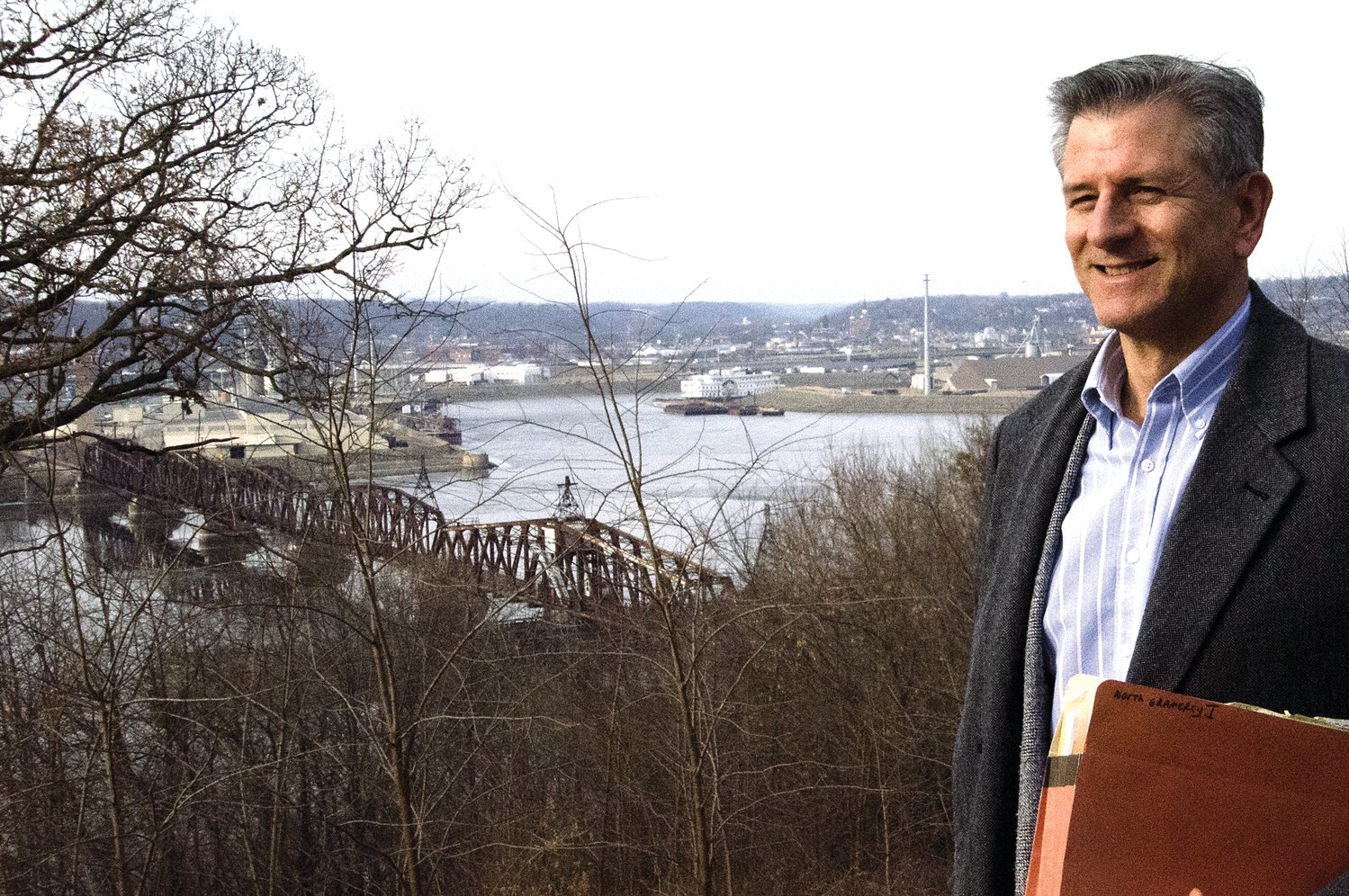 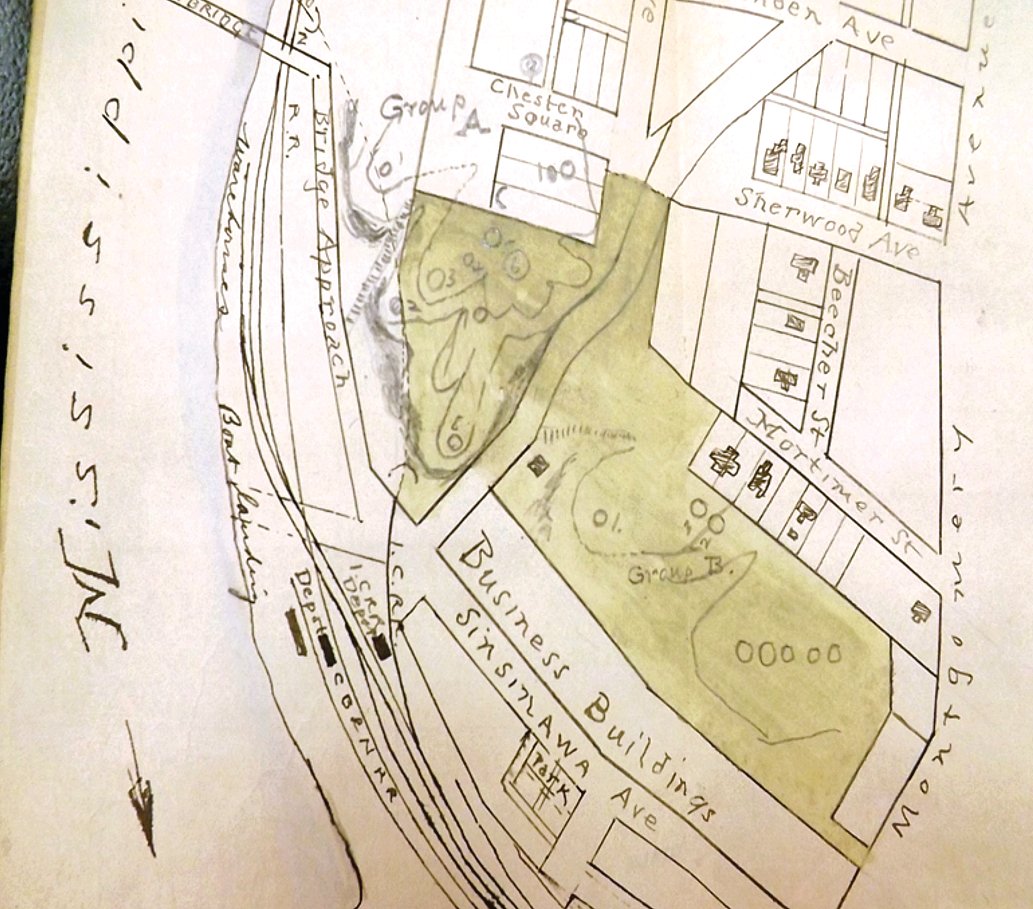 William Baker Nickerson’s map of the mounds at North and South Gramercy Park. One can also see the approach road for the High Bridge to East Dubuque.
Previous Next
Posted Tuesday, January 7, 2020 7:55 am
by P. Carter Newton

EAST DUBUQUE–Tucked away in a corner of East Dubuque is a park few know about. It’s squeezed between houses and the bluffs which lead down to the Mississippi River. It offers commanding views of the river and Dubuque, Iowa.

This is North Gramercy Park, four acres of rugged land filled with eight burial mounds from the Middle Woodlands period. It’s a historical jewel. These are known as the Dunleith Mounds.

It’s basically a cemetery–a really old cemetery–and fortuitously, it’s been preserved as such for a couple thousand years.

The forefathers of Dunleith–now East Dubuque–might have helped greatly when it came to preserving this land. When platting Dunleith in 1856, 164 years ago, they set aside land for two parks, parks called North Gramercy and South Gramercy. The city of East Dubuque still owns the parks.

It hasn’t faded from the memory of East Dubuque attorney and Gramercy Park Foundation President Jeffrey Trannel. As a student at Loras College in the late 1970s, he says that he “accidentally ran across a Smithsonian report on the Dunleith Mounds.” That report ignited a lifelong interest.

But he notes that North Gramercy Park might be considered East Dubuque’s forgotten park.

Archeologist Phil Millhouse concurs. He’s amazed at how “little the park is known about or rallied about. I know tons of people who grew up here and I’ll mention the park and they don’t know about it. This is an incredible jewel of a park,” he says.

But that forgotten park status might not hold true into the future. Located just off Riverview Terrace, this historical gem might not be quite so hidden in the future.

The Gramercy Park Foundation has become the caretaker for these parks. Until now the organization showered most of its attention on South Gramercy Park with thousands of dollars of investment and hundreds of hours of volunteer efforts.

The foundation has been able to make these investments thanks to annual support of $16,000 from the city and through additional fundraisers.

Just this last year, the foundation began setting its sights on North Gramercy Park hiring Millhouse to conduct an archeology survey around the park and MSA Professional Services to prepare a master plan.

It is this plan which Trannel and Dan Schmitt, MSA landscape architect, presented to the East Dubuque City Council on Monday, Dec. 16. The council unanimously approved the plan, which did not include requests for additional funding.

Trannel says there are a lot of ideas in the plan. The goal is to make this a “low impact park.” There won’t be large crowds nor families coming for picnics.

The core attraction is already there: the large, impressive burial mounds. You can’t miss them if you venture to North Gramercy Park.

Preserving these mounds so future generations can learn about their purpose and how they were built is a key element of the foundation’s vision and purpose of the master plan.

“This can be a drive-up experience,” Trannel notes.

There’s another historical element to preserve on this property. In 1938, the Civilian Conservation Corps (CCC) built Perrot Fort into the base of Mound 4. Walls and fireplace are all that remain, but they now help stabilize the burial mound and so preservation of that structure is necessary.

Trannel notes that the CCC also had plans to build a tennis court at North Gramercy, but the start of World War II changed all that. Perrot’s Fort was left little used and in 15 years or so fell apart.

Trannel admits that there are “a lot of pipe dreams” in the master plan. It’s a vision as to what the park could be. But there’s also practical stuff to facilitate making this a low impact park.

At the core is preserving those mounds.

“First thing, we need to consult with those familiar with preserving mounds,” Trannel noted.

To promote public use of the park, a number of projects must be tackled as well, such as a small parking lot, screening between the park and nearby homes, fencing along the bluff and walking paths. Trannel also wants to protect the large oak trees on the property.

One person who is excited to see thought going into North Gramercy Park is East Dubuque City Manager Loras Herrig.

Herrig, who also sits on the foundation, told the council that people look for two things when considering a move into a community: good schools and good parks.

“It’s in the city’s interest to see this park is developed correctly,” he noted.

Herrig was also especially complimentary of foundation members who volunteer their time monthly at the parks.

Millhouse adds, “I really like Gramercy Park. I have become very fond of it. I hope this new attention will provide some spark to grab onto this thing.”

A cemetery: Builders buried their dead there; didn't live at the mounds

A cemetery: Builders buried their dead there; didn't live at the mound

GALENA–Daniel “Dan” Burrows, 68, Galena,  passed away peacefully on Aug. 6, 2022, at St. Dominic Villa, surrounded by family, after a courageous battle with cancer. A funeral …

NAPERVILLE–John W. Reifsteck, 76, Naperville, passed away Tuesday, Aug. 2, 2022. A funeral service will be held at noon on Thursday, Aug. 11 at the Furlong Funeral Chapel, Galena, …